Here is the ending of Geoff Dyer's introduction to The Ongoing Moment:

Dorothea Lange said that "the camera is an instrument that teaches people how to see without a camera." I might not be a photographer but I now see the kind of photographs I might have taken if I were one.

What are we to make of this amateur's production? It is clearly an exponent of what Barry Gewen called "the belletrist option" of art criticism, which

allowed for the exercise of personal style, the careful inspection and precise expression of one's own reactions, and it found adherents among poet-critics like John Ashbery and Frank O'Hara, and individualistic, iconoclastic intellects like Susan Sontag.

In The Ongoing Moment, Mr Dyer writes about photography, for the most part American photography as practiced by a handful of masters. It is not a book for beginners; it assumes not only some knowledge of the history of American photography - the famous photographers and what sort of pictures they have taken - but also access to the many photographs that Mr Dyer talks about but does not reproduce. It is certainly not a picture book; the black-and-white reproductions are quite small and just as matte as the text. There are section breaks, but no chapters - no formal organization of any kind. I was reminded of the French phrase, de fil en aiguille, which is best translated, "from one thing to another." The "things" are photographic subjects, the subjects that have caught Mr Dyer's eye. Sometimes these subjects are real objects, such as hands or barbershops. Sometimes they're much more conceptual, such as seeing the world in black-and-white but photographing it in color, or variations on that theme. Sometimes it is the relationship between the photographer and his subject, a matter that's illustrated by nude photographs taken by Alfred Stieglitz and Edward Weston. Always playing somewhere in the background is some idea or other of "America."

Photography presents three unique aesthetic challenges - challenges that don't arise in other, older art forms. First, it is possible to take a great photograph without even trying. Second, photography lends itself to punning - a literary, not a visual exercise. Many photographs are are both meaningless without captions (just flip through any issue of The Economist) and prone to become mere pendants to their titles. Third, photography is prolific. For all practical purposes, the number of photographs currently in existence is already infinite. In order to keep a clear head, you've got to build your own mental museum of photography, and if Geoff Dyer doesn't provide any floor plans he at least suggests some interesting curatorial possibilities.

Even so, after I'd read The Ongoing Moment, and tracked down as many of the unreproduced images as I could, I realized that I couldn't say a thing about it without rereading Susan Sontag's On Photography. This is a reflection of how my mind works. In On Photography, Sontag gathers six essays that, without being absolutely comprehensive, articulate an aesthetic of photography. In more vulgar terms, Sontag offers insights that organize your thoughts about how you're going to build your virtual museum. Writing about Michelangelo Antonioni's Chung Kuo (a film I'd like to see), for example, Sontag analyses the negative Chinese response to that picture and works out a stunning demonstration of a given culture's power to enhance or deflate a photograph's expressive possibilities.

We find the Chinese naive for not perceiving the beauty of the cracked peeling door, the picturesqueness of disorder, the force of the odd angle and the significant detail, the poetry of the turned back. We have a modern notion of embellishment - beauty is not inherent in anything; it is to be found, by another way of seeing - as well as a wider notion of meaning, which photography's many uses illustrate and powerfully reinforce. The more numerous the variations of something, the richer its possibilities of meaning; thus, more is said with photographs in the West than in China today. Apart from whatever is true about Chung Kuo as an item of ideological merchandise (and the Chinese are not wrong in finding the film condescending), Antonioni's images simply mean more than any images the Chinese release of themselves. The Chinese don't want photography to mean very much or to be very interesting. They do not want to see the world from an unusual angle, to discover new subjects. Photographs are supposed to display what has already been described. Photography for us is a double-edged instrument for producing clichés (the French word that means both trite expression and photographic negative) and for serving up "fresh" views. For the Chinese authorities, there are only clichés - which they consider not to be clichés but "correct" views.

One could play with this all afternoon. One could reflect, for example, on the starkly unimaginative approach that Chinese culture has to the entitling of book. On its preference, flatfooted to our ears, for ordinal identifiers: "Number One Factory," "Number Two Son." Central to Sontag's point is the authoritarian cast of Chinese idealism, a habit of shunning, mentally and otherwise, the disarranged. Peeling paint says: poor maintenance. As I daresay it does to most Westerners as well. I'll admit that my first response to a Walker Evans or Dorothea Lange shot of some spavined hovel is: thank goodness I don't have to live there. So long as "living there" is a possibility (as the Chinese have learned it can be for everyone, subject to political vagaries), the ruin is not quite so appealing, or is appealing only after a preliminary thanksgiving.

Aside from some fashion and industrial photography, art photography in the West has no time for the "official" view that the Chinese prefer. The act of preference itself discredits such images. Western photographers (and their patrons) don't want to know what you look like when you've had a chance to comb your hair and freshen your lipstick. On the contrary. It's no wonder that Diane Arbus, herself a freakish giant of modern photography, preoccupies one of Sontag's essays. Arbus was interested in people whose unattractiveness, from the Chinese point of view, was so great that they no longer bothered trying to arrange themselves for an attractive but deceitful portrait. Her subjects were more or less conscious of the fact that they could represent no official ideal whatsoever. The only use to which Chinese culture could put Arbus's work would be the frightening of little children.

All of this has come to be so taken for granted by photographic discourse that Mr Dyer never explores the aesthetic of dilapidation that has stamped American photography ever since Stieglitz stopped aiming for painterly beauty. One of the most important photographers from whose estate Mr Dyer apparently failed to get permissions, Robert Frank, built a career out of making America at its most dolled-up look dilapidated, failed, and exhausted - even when his subjects were bursting with enthusiasm. It is no wonder than an English critic would be drawn to the most self-critical of the American arts, the most persuasively damning - and I'm not talking about Schadenfreude here. I'm talking about the healthy corrective that great American photographs have provided to the pabulum of airbrushed images appearing in shelter magazines and on television. Coming away from The Ongoing Moment, I see that the appeal of American photography for educated Americans lies in their counterbalance to official dishonesty and bluster.

Which may explain the peculiar fascination of derelict gas stations. How could something so recent look so unimaginably old as the dumps, shown here, photographed by William Eggleston, Dorothea Lange, and Jack Leigh? Mr Dyer quotes Joel Meyerowtiz: "I am not interested in gas stations or anything about gas stations. This happens to be an excuse for seeing." To which I say, nonsense. Gas stations are the most common novelty on the modern landscape, and the immense evolutionary pressure brought to bear upon the form in barely a century makes for a remarkable record of architectural and symbolic change. A brand-new gas station says, "No Problem!" An abandoned one says something quite different, notably that our relationship with fuel suppliers is unsteady. Old cars tend to disappear; old gas stations are not only the major non-residential ornaments of old highways, but their effective street-sign as well; if the highway itself were not semi-abandoned to begin with, the station might be functioning.

Now, there is nothing of this in the six-odd pages in which Mr Dyer writes about photographs of gas stations. His discussion begins, unsettlingly, with Edward Hopper's painting of a Mobil station at twilight. Mr Dyer is interested in what might be happening in the picture, or what might just have happened, or what might be about to happen. That is a very reasonable curiosity; gas stations are places where people come and go; only folks with real problems spend any time at them. But he reads Dorothea Lange's Norwalk Gas Station (c 1940) very differently from my reading of it. He takes the new-looking signs (not so new-looking to me, I'm afraid) as characteristic of the picture. He says something that I can't follow about the filling pump (there are two, actually, of different design). And he completely discounts the derelict structure in the background, which may or may not be part of the gas station proper but which certainly defeats the freshness of the genuinely new. The whole scene is as dusty and sunstruck as Egypt. 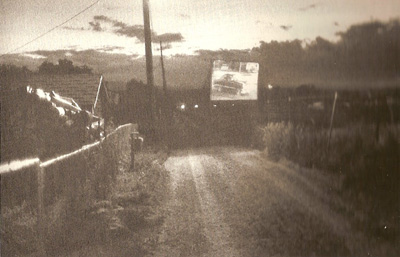 Reading The Ongoing Moment was a challenge for me, sometimes because I wasn't interested in the photographs that caught Mr Dyer's eye, sometimes because I wasn't interested in Mr Dyer's topic, sometimes because I was frustrated by the tiny reproductions (or their absence altogether), but most of the time because I seemed to take different things from the photographs that we both liked. Take Michael Ormerod's Untitled, which I've copied above. It's a wonderful nocturne of a drive-in theatre. Because Mr Dyer is in the middle of a riff about windscreens - the British usage is telling here; we see what's outside on the windscreen of a car - what interests him most about this photograph is the fact that there is an automobile on the drive-in screen. He overlooks entirely the odd foreground illumination, coming from a lamp outside the shot, and the glaring reflections to the left. (Is that a truckload of aluminum telephone poles?) The intersection of the detached cloud with the lamp-pole and the curious sense that the house on the left is watching the movie at the drive in - these haunting moments endear the picture to me. But Mr Dyer is talking about something else at the moment, and has other points to make.

And how could it be otherwise? Was I expected a book that would be congruent with my own ideas? Possibly - I'll admit it the possibility, and even the possibility that I'd have found such a book breathtakingly eye-opening when in fact it would have been anything but. Nevertheless - and perhaps because of all the photographs of old roads and old people and old gas stations - I felt that I was in the backseat of a long childhood car trip, in the era of no air-conditioning. I felt both powerless and uncomfortable.

In short, I misread the book, and probably oughtn't to be writing about it. But that would be to ignore the fact that I was on a car trip that took me through my own country in a way that, for all its shambolic surface clutter, organized the material in a way that made me think about photography at a time when I've been thinking about twentieth-century painting. This is not the place to talk about art and photography as I've been experiencing them lately, but I can thank Geoff Dyer for prompting an inner conversation - not to mention the purchase of several books of photographs. Most useful, I think, has been the photograph's rough-and-ready ability to take on as a caption everything that's written about it. (January 2006)