¶ Matins: The "culture" at Goldman Sachs gets the gimlet treatment from Choire Sicha and John Lanchester. Choire laughs at the "horn-blowers" whose self-reviews were aired in the Senate, while John compares the testifying executives to the hooligans who cheer for the Millwall FC. ("No one likes us/We don't care!") A commenter cheekily called A J P Crown rejoins:

Bankers aren’t Millwall supporters, they’re the players. They do their best for Millwall this year, but next season they could be doing their best for Morgan & Accrington Stanley and they certainly aren’t working for any club’s supporters (the supporters being the electorate in this mataphor).

Meanwhile, Felix Salmon compares the publicity statements to the actual appearances. "Look over Fabrice Tourre’s right shoulder whenever he’s on camera: the other face in the frame is that of Goldman spokesman Michael DuVally. And it’s not a happy one."

¶ Lauds: Ann  Midgette continues her campaign to improve classical audiences by urging President Obama to set an example by not worrying about "when to clap." She has some really good ideas about how to proceed, the excellence of which we'll discuss some other time.

I suggest that the White House dispense with classical music convention and start hosting shorter concerts: half an hour, 40 minutes, 20 minutes. A more informal format might mean that you could give several concerts a year -- perhaps in tandem with state visits or other official functions -- rather than a single longer one that bears the weight of representation on its shoulders.

In the age of recorded music, short concerts are the opposite of disrespectful.

To see the pattern at first hand, consider groups of co-workers who perform similar tasks in your own company. In one case, suppose that your two most productive co-workers leave the job; in the other, suppose that the three least productive leave. Which group’s departure causes a greater loss of value? Most people would answer that losing the top two hurts more.

If so, economic theory holds that their combined salaries should be higher than the combined salaries of the bottom three. Yet the typical pattern is the reverse: any three workers in a group performing similar tasks earn substantially more than any other two.

In short, the startling fact is that private businesses typically transfer large amounts of income from the most productive to the least productive workers. Because labor contracts are voluntary under United States law, it would be bizarre to object that these transfers violate anyone’s rights.

¶ Tierce: Did we say "culture" in connection with Goldman? Jonah Lehrer writes about the enculturation problem: we see what we're taught to see.

In one 2003 study, Kevin Dunbar had undergraduates at Dartmouth College watch a couple of short videos of two different-size balls falling. The first clip showed the two balls falling at the same rate. The second clip showed the larger ball falling at a faster rate. The footage was a reconstruction of the famous (and probably apocryphal) experiment performed by Galileo, in which he dropped cannonballs of different sizes from the Tower of Pisa. Galileo's metal balls all landed at the exact same time -- a refutation of Aristotle, who claimed that heavier objects fell faster.

While the students were watching the footage, Dunbar asked them to select the more accurate representation of gravity. Not surprisingly, undergraduates without a physics background disagreed with Galileo. (Intuitively, we're all Aristotelians.) They found the two balls falling at the same rate to be deeply unrealistic, despite the fact that it's how objects actually behave. Furthermore, when Dunbar monitored the subjects in an fMRI machine, he found that showing non-physics majors the correct video triggered a particular pattern of brain activation: There was a squirt of blood to the anterior cingulate cortex, a collar of tissue located in the center of the brain. The ACC is typically associated with the perception of errors and contradictions -- neuroscientists often refer to it as part of the "Oh shit!" circuit -- so it makes sense that it would be turned on when we watch a video of something that seems wrong.

The recognition that "Intuitively, we're all Aristotelians" is the beginning of critical thinking.

¶ Sext: Every now and then, somebody distills a drop of the true oddness of Manhattan Island in a New York Times story. "Too Fancy? Too Long? How to Name a Co-op," by Christine Haughney, is merely the latest instance of Gothamdipity. We do wish that Ms Haughney had a clearer understanding of the rule that names are all very well for buildings on the West Side of Central Park.

Then the board met to narrow the choices. After several meetings at which members deliberated whether the building seemed tropical enough to be called the Bermuda or whether the name should have one word or two, members settled on three contenders: the Sterling, Sutton Grand or Prestige. In February, Mr. Marotta slipped under doors a ballot with the three finalists and asked the residents to return them to the doorman.

The Editor wishes that you could have been there when Kathlleen rolled her eyeballs, all the way to Staten Island, at the mention of "Sutton Grand" — only to wish that she could have them back for a propulsion, into deepest New Jersey, at the proposal of "Prestige."

¶ Nones: What's going to happen to Greece? A short piece about geopolitical destiny to open your sinuses from A Fistful of Euros, followed by Felix Salmon's discouraged report of poolside talk at an LA bond conference. Fistful:

In fact, for modern Greece, the Cold War context seems particularly important.  The negotiations between Stalin and Churchill over Greece are fascinating reading, and if you make your benchmark the fate of countries that were viewed as pawns on the Cold War chessboard, then Greece’s economic performance looks a lot better (think Africa, Middle East, and Latin America).

¶ Vespers: Brooks Peters looks into Patrick Hamilton as only Brooks Peters can. Proving my point, by the way, that only intelligent gay critics can be bothered to doubt the homosexuality of fellow-travelers. What if Alfred Hitchcock's Rope were all about incest?

In fact it is fascinating to read Patrick Hamilton’s letters to his brother which are kept at the Harry Ransom Center at the University of Texas in Austin, particularly those that touch upon the enormous success of Rope. Patrick seems to have felt that his having “made it” on the stage would solve the pair’s financial woes. Indeed, Hamilton lived off the royalties from it, and other hit plays, for the rest of his life. “How can I begin to describe to you the uncanniness of my success?” he wrote Bruce (quoted with permission). “It is all a strange Byronic dream. For it is not only the money, it is the fame. And by this, I do not mean a petty notoriety… I have done exactly what Noel Coward did with The Vortex. I am known, established… the world is truly at my feet… And all through Rope. It’s all too funny.” He ends the letter by saying “Remember that we have come into our estate.” Clearly for Hamilton, Rope represented a means to draw an even closer tie to his beloved brother.

¶ Compline: "We Have Met the Enemy and He Is Power Point." Elisabeth Bumiller's latest chapter in the story about the nonsense of wartime bureaucracy (and, in particularly, the preposterous unintelligibility of the flow-chart shown below) must bring joy to a self-published Yale man. (Identity disclosed upon request.) 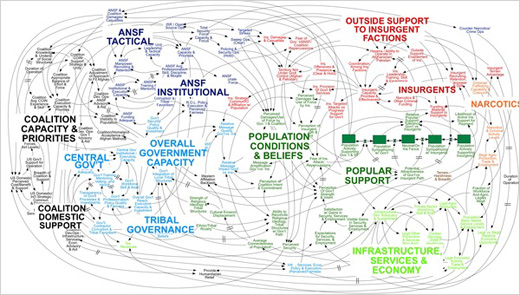 Gen. Stanley A. McChrystal, the leader of American and NATO forces in Afghanistan, was shown a PowerPoint slide in Kabul last summer that was meant to portray the complexity of American military strategy, but looked more like a bowl of spaghetti.

“When we understand that slide, we’ll have won the war,” General McChrystal dryly remarked, one of his advisers recalled, as the room erupted in laughter.