When Strangers With Candy was over, on Friday afternoon, I called Ms NOLA at work, and we agreed to meet at the regular place, the Starbucks on the third floor of the Union Square branch of Barnes & Noble, in about an hour. This gave me plenty of time for a leisurely saunter up the Bowery and Fourth Avenue, with a visit to the St Mark's Book Shop at Cooper Square. The timing was perfect, because before I even made it to the escalator at Barnes & Noble, Ms NOLA appeared out of nowhere. She must have walked in just behind me. We decided to go to Republic for lunch. I had the tasty Sauteed Beef Noodle Salad, and it looked just like the photograph that you'll find, it you're interested, at the restaurant's frame set site. 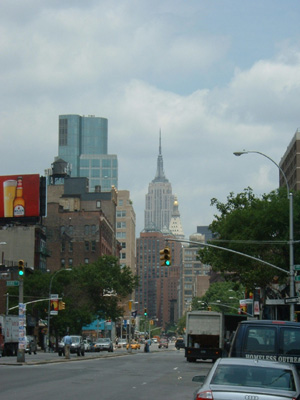 The Empire State Building, seen from the Bowery.

Grace Church, seen from the rear, beyond its parish house.

Now the walking part of the afternoon began - with a subway ride. For the second time that day, I found myself climbing the station stairs at Bleecker Street. We crossed Houston Street and walked down Lafayette Street to Prince Street, where we turned left, into the neighborhood now known as NoLIta - "NOrth Little ITAly." (There is something desperate about this nomenclature, in light of the fact that Little Italy proper has been swallowed almost entirely - but for a few gelaterie and other sweet shops on Grand Street - by Greater Chinatown.) We were on the lookout for "Old Saint Patrick's," the original cathedral, completed in 1815 and almost stupefyingly humbler than the Gothic jewel uptown. 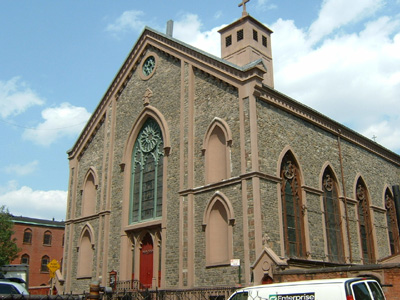 Ms NOLA wandered into a "silly dress shop" but wandered right out again, more strongly attracted to an independent bookseller that she'd heard about but never visited, McNally Robinson, across the street. I was already carrying three books in my shopping bag, one of which I'd brought with me from home and two of which I'd accumulated along the way, so, before I got too interested in anything, I asked the clerk, "Do you ship?" "Where to?" he asked in reply. "Uptown," I said. "Sure," he said. McNally Robinson's fiction department is divided into geographical areas ("France" "South Asia"), but the first section is entitled "Nomads," and that's where you'll find Joseph Conrad and Vladimir Nabokov, just to name two Slavs who mastered the English tongue. That's where I found Lawrence Durrell's The Alexandria Quartet, a haunting tetralogy that somehow vanished from my library. When I complimented the clerk on the "Nomads" section, he told me that I was in the distinct minority, that most shoppers find it very annoying. 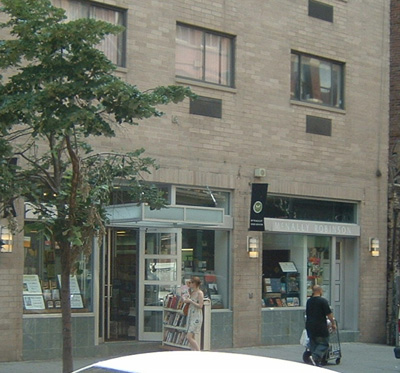 Presently we were walking down a shady and lovely block of Mulberry Street. At the corner of Kenmare Street, however, we encountered a souvenir of the Bad Old Days of Gotham. The cornice and boarded-up windows of the derelict building caught Ms NOLA's eye first; then we both stared at the graffiti at street level. This sort of thing has become so unusual in lower Manhattan that it's almost interesting. 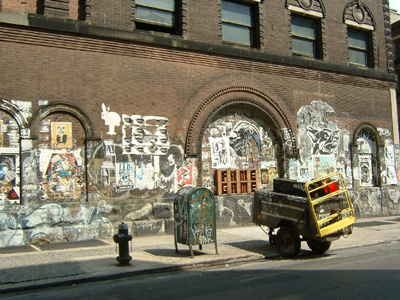 Kenmare Street turns into Delancey Street at the Bowery. Delancey, in turn, stretches for what seems like forever toward Manhattan's eastern extremity and the Williamsburg Bridge. There is a strange sense of having dropped back into a smaller, more sky-spacious city. 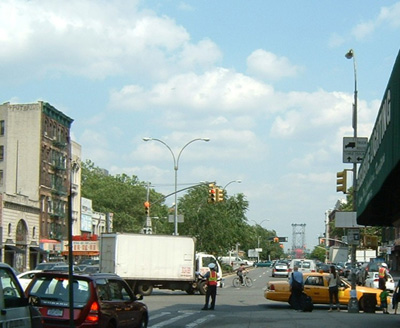 Delancey Street, with the towers of the Williamsburg Bridge in the distance.

We made it as far east as Orchard Street, where I had a vague idea of looking for a fabric shop that Kathleen had mentioned. In the jumble of Chinese shop signs, however, the search was abandoned before it could begin. It was time to start thinking about heading home, for we had (premonitions, you weather-watchers!) a date in Central Park at 7:15. Joan Didion was going to read from The Year of Magical Thinking at Summerstage, and then talk about the book with Philip Gourevitch, and Ms NOLA had signed up for two passes to the VIP seating. It was time to think about going home, also, because Ms NOLA wanted to show me where a friend of hers lives - on Sullivan Street.

We probably could have done better than to hike along Grand Street, which is very, very congested, but if we had taken another route we might have missed the Old Police Headquarters on Centre Street, currently a luxury condo. 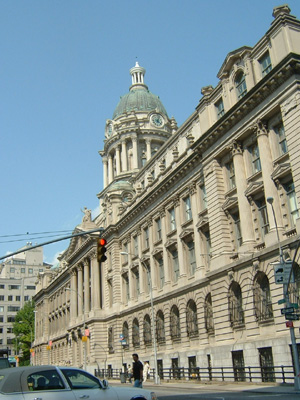 By the time we reached Sullivan Street in Soho, the camera had been put away, despite the photogenic crowd milling outside Félix, a bistro at the corner of Grand and West Broadway. We had stopped at Anthropologie (on West Broadway), and I'd bought an old-fashioned gelatine mold. When I was a child, I was fascinated by the elaborate shapes that graced boxes of Jell-O, and I couldn't understand why our Jell-O always came in Pyrex bowls. Buying the mold yesterday was yet another instance of gratifying a youthful passion. At such moments, I always think of the following lines, from Robert Louis Stevenson's Child's Garden of Verses:

When I am grown to man's estate
I shall be very proud and great,
And tell the other girls and boys
Not to meddle with my toys.

Something about hanging out in a store (on the check-out line, mostly) broke our momentum, but we soldiered on over to Sullivan Street and saw Ms NOLA's friend's charming house (she has a studio). At the corner of Sullivan and Houston, I espied a Tibetan emporium. Peering in, I saw about a dozen hats of the kind that Kathleen likes to wear in winter. (Note: there's something contradictory about saying that Kathleen likes to wear something in winter. She doesn't like anything about winter.) They're caps of heavy brocade, rimmed with fur. I asked the lady behind the counter for a card.

Then we hoofed it back to the Bleecker Street station, where a train promptly pulled in to carry us uptown. We were so tired that Ms NOLA drifted off once or twice. Back at the apartment, we restored ourselves with a pot of tea, and, for Ms NOLA, a slice of chocolate cake. I showered and changed, and, at seven or so we went down to get a taxi.

Getting out at 72nd Street and Fifth Avenue, we were met by a big soft puff of wind that smelled of trouble. We looked up and saw that the weather had changed since the afternoon. The sun was gone, and so was any hint of blue sky. Oh, well, we thought. I'm only wearing cotton, I thought. My hair and beard are too short to be mussed by rain. At the "press tent," we were given green wrist bands; actually they were put on us by the receptionists. When we climbed the steps to the playground that's occupied by Summerstage, I saw a crowd of people and no empty seats, but a cordoned off zone of choice seats soon presented itself. "Green wristies," said the volunteer in charge of guarding the area. There weren't many others of us. All real ViPs, of course, were nowhere near Central Park on this Friday night of a Fourth of July weekend. By the time the event began, the area had been opened to everyone.

The first shower began minutes into Joan Didion's reading, from "Goodbye To All That," a once poignant and now doubly-poignant memoir of her early days in Manhattan, in the summer of her twentieth year - 1955. Some people improvised head-coverings, but many of us just sat still. The rain lasted for about ten minutes, and when it stopped I began to dry off immediately. Ms Didion then read from the opening pages of The Year of Magical Thinking, which was disappointing because we'd heard her read the same material last fall, and, surely, by this time, most of the people in the audience must have read it, along with the rest of the book. It remains, however, very powerful and quietly harrowing prose. When the reading was over, the crowd delivered quite an ovation, with plenty of ballpark whistles. Stage managers set up a table, with a black cloth and a vase of flowers, two mikes and two chairs. Lightning flashed to the north.

In the differences between their public bearing, Ms Didion and Mr Gourevitch showed what thirty years of media expansion has done to the writing profession. Philip Gourevitch is the editor of Paris Review, and a frequent contributor to The New Yorker. He's an attractive man in his forties (I'd say) who, without being slick, quite, clearly knows his way around a lectern. He is an engaging speaker and, I have no doubt, a polished symposium participant. Ms Didion, in contrast, is a writer and nothing but a writer. She reads in a flat voice that dips now and then in irony but is otherwise uninflected. She regards the microphone as if it were a gyrfalcon about to take a poke at her. She radiates a shy standoffishness that I was very surprised to see broken at one point by an extremely warm smile. Joan Didion has not retooled herself for the age of the writer as performer.

She was in the middle of answering a question about snakes that Mr Gourevitch had posed in reference to her prose - "Your work is full of snakes" - when a second shower began. It rather quickly became a downpour, and the two people on stage were almost as quickly disconcerted by it, for, even though they were high and dry, they could tell from the beating on the canvas overhead that the audience, which was already bailing, might not be able to hear them. Ms NOLA and I got up to leave, and as we were speeding toward the exit we could hear the presenter close the event with game aplomb. There was no shelter in the trees, for the rain was not coming from the heavens only. It was as if massive showerheads were being aimed at us, and with the strong wind, the water was very cold. It was almost distressing, even though the only thing I really worried about was my pair of loafers. How to get home! I urged us toward the Hunter College IRT station, but in the event we were saved by a miracle, in the form of  an empty cab that appeared in the middle of Park Avenue. 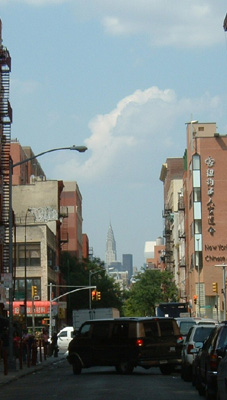