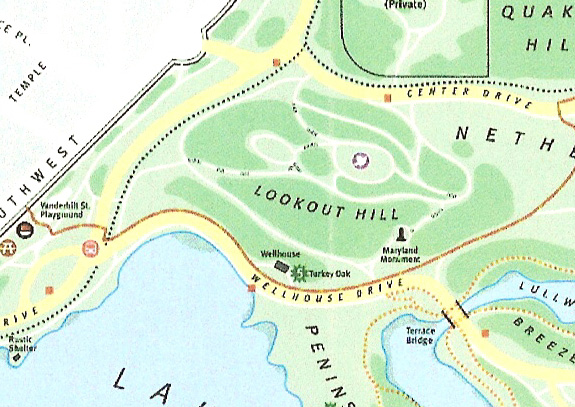 There will be no summer hours for me today, as Ms NOLA and M le Neveu are on their way to New Hampshire, to visit my aunt and my cousin - M le Neveu's grandmother and mother, respectively. I'll go to the movies - A Scanner Darkly looks like a good choice, although there's also the guilty pleasure of You, Me and Dupree at ten - then have lunch at the Metropolitan Museum, and then come home to do the weekly housework. Winter hours for me! But Ms NOLA and I did put her summer hours to edifying use last week, with a more penetrating exploration of Prospect Park in Brooklyn. 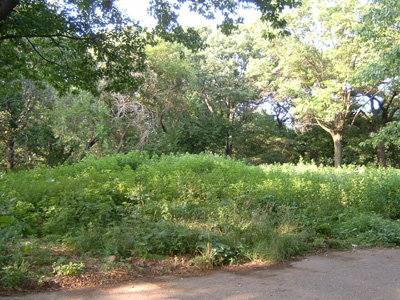 The object of the expedition was to climb what I call "Mount Brooklyn." It is the highest point in Brooklyn, and if the Parks Department would only clear away a few of the trees, I'm sure that one could see the ocean. Officially known as Lookout Hill, this is one of the scruffier parts of Prospect Park, as the dispiriting image above suggests. No attempt is made to draw in visitors. The granite steps are in pretty bad shape, and the grounds are completely wild.

Climbing down the other side of the hill, we came upon the shores of the Lake, which Ms NOLA had never seen before. The Lake is the end of what Park people call "the watercourse. It begins at Falkill Falls, not far from the baseball fields in the Long Meadow, and twists through the heart of the park in a chain of pools and creeks, ultimately emptying in the Lake. Entirely manmade, it is far beyond anything that Olmstead and Vaux dreamed up for Central Park. 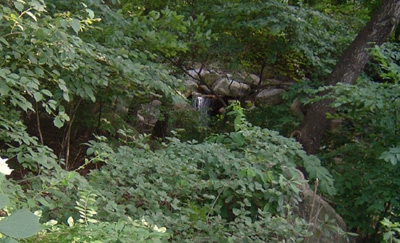 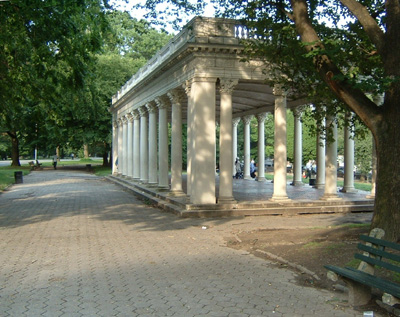 We walked around the Lake to the Peristyle, at the southern extremity of the park. I remembered something a bit more grand - but then, that's how memory works. Although I've breezed to this point in my narrative, I was in fact thinking of nothing but how long the walk back would be. I'd been on my feet for nearly three hours at this point, schlepping a chair to Brooklyn, climbing up and down Ms NOLA's building as well as Mount Brooklyn, and my cranky, out-of-shape body was registering muffled protests. So I took Ms NOLA's map of Prospect Park and charted a very direct route back to Grand Army Plaza. Unfortunately, it was too direct - it took us over Sullivan Hill. This I did not need. Five minutes of strolling up a slope was quite taxing. The walk did take us by some of the Park's more picturesque buildings, such as the belle-époque Boathouse, now an Audubon Center, and a number of Vaux's exotic pavilions. The Boathouse aside, none of these was in good repair, and I found it impossible not to reflect on the very inferior level of upkeep on the southeastern side of the park. The park is effectively divided in two by a ridge of wooded hills - Sullivan, Quaker, and Lookout - that most visitors avoid, not because it's dangerous but because people come to the park to have picnics and play games. The northwestern half lies on the edge of affluent Park Slope, and is far better maintained than it was when I spent the summer in Brooklyn in 1980. The southeastern part borders on less prosperous neighborhoods, and if anything it's in marginally worse shape than it was twenty-six years ago. It's possible to be a Prospect Park regular without knowing how much better/worse things are on the other side of the woods. 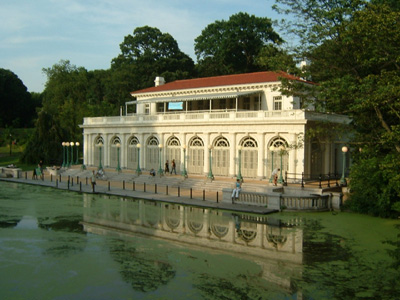 Back on Ms NOLA's side of the woods, we ambled along the Long Meadow, this time in the low sun. I had seen The Devil Wears Prada in the morning, and Ms NOLA and I found the movie to be a bottomless source of questions and comments. Strenuous exercise, however, had much diminished my sense of living in a world dominated by a certain calm-voiced fashion editrix. I was regaining a sense that there is more to life than cerulean. Approaching the Seventh Avenue subway stop, moreover, I was happy to note that my quads weren't screaming. I might be in bad shape, but I was in better shape than I'd been in a month earlier, when, approaching the same subway stop, I knew what it is like to need a wheelchair. (July 2006)