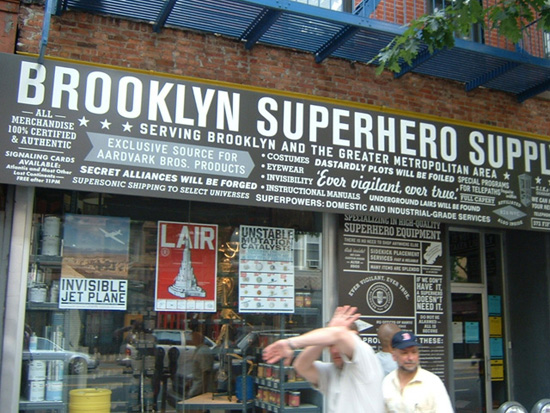 For ages, Ms NOLA has been telling me that I have to come to Brooklyn to see her apartment and visit her neighborhood. In a broad sense, it used to be my neighborhood, but only briefly: the summer of 1980. I rented an apartment in Park Slope and studied for the bar. When Kathleen got her own place in the fall (a studio two floors down from where we live now), I very unofficially moved in with her, and went to Brooklyn only rarely, but I kept the apartment until shortly before our wedding in October, 1981. If I liked Park Slope, I loved Prospect Park. Connoisseurs say that Prospect Park, the project that Frederick Law Olmstead and Calvert Vaux worked on after Central Park, is the better creation, and connoisseurs are right. One has only to gaze at the Long Meadow to sink into a state of peace and serenity. On a sunny afternoon in June, that is.

A stroll through the western edge of Prospect Park was the last leg of a walk that Ms NOLA and I took on Friday afternoon. We hadn't made any other plans to take advantage of Summer Hours when Ms NOLA mused on the inconvenience of having to go to her apartment, which is technically uninhabitable at the moment because of a bug problem, just to pick up a pair of shoes to wear to the memorial service that we attended on Saturday. If she dashed to Brooklyn from work, when would she get back to Manhattan. "Let's do Brooklyn," I said. And that's what we did. We met at the Barnes & Noble in Union Square, hopped on the Q train, and were presently at Seventh and Flatbush Avenues. I do mean "presently" - only three stops intervene.

We had lunch at Mango Thai, Ms NOLA's local hangout. (She was greeted very warmly indeed.) I ordered Drunken Noodles with shrimp, and found once again that there is much for me to learn about Thai cuisine. I can't eat enough mee krob, but beyond that I don't go very far. It wasn't so much the tastes as the textures that made the dish hard to get down. Now I know how the old folks felt when they used to refuse to try curries, forty plus years ago.

After a quick visit to the home of Crazy Eights, we dropped down to Fifth Avenue and headed south. Fifth Avenue was fairly derelict in 1981; now it is home to jillion cool restaurants, such as Al di la and Stone Park Café (which boasts a mouth-watering bar menu). We also passed the Brooklyn Superheroes Supply Store, the front for Dave Eggers's East Coast branch of 826 Valencia. On sale at BSS are cans of "Unstable Plasma" and "Hypnotism." Capes are available, and they can be "tested" by standing on a grid over electric fans. You can buy identity kits that will allow you to conceal your superpowers with a bland exterior. There is an elaborate rigmarole for making actual purchases, including the declaration of an oath that the buyer will never use his or her superpowers for the forces of evil. It is all supremely whimsical, and, I'm sorry, but I want to know what's in the "Unstable Plasma" can.

Western Brooklyn and Manhattan are doubly symmetrical; in Brooklyn, the avenue numbers get higher, not lower, as you proceed from west to east, while the street numbers advance from south to north. We went as far as Eighth Street, which we climbed all the way to Eighth Avenue. There, across the street, was my apartment - but which building was it in? I finally settled on Nº 817, because of the window configuration. I really did live right on top of the F train, and right next door to a plain old neighborhood luncheonette that has since become the far more fashionable Dizzy's.

Thence we walked up Ninth Avenue, with its grandish bow-fronted houses, and crossed Prospect Park West into the park. Nothing seemed familiar. I wanted to see something that I had taught myself, incorrectly, used to be the "Ladies' Pavilion." When we found it, we learned that it was and is in fact the Tennis House, a colonnaded pavilion that has been beautifully restored. Ambling north through a spot of woods, we came out at a beautiful vista of the north end of the Long Meadow. Here we sat for a while. I took pictures, but they don't capture the quiet happiness that flooded me for fifteen minutes.

What a dummy, I thought, what a dummy I've been not to come here sooner. But it wasn't hard to adduce the obstacles. First, of course, there was work, which left little time for visits to a borough that held no appeal for Kathleen (largely because of the subway ride, which, until Friday, I had no idea could be so quick). Then there was Pourover, the house in Connecticut that ate me alive for ten years. By the time that experiment was over, ankylosing spondylitis and its related afflictions held me in their grip, and within a couple of years I wasn't straying far from home during daylight. (I'm talking in terms of blocks.) Only Remicade arrested my decline and reversed my decrepitude. One could say, then, that it's only in the past two years that I've been free to consider a purposeless jaunt to Brooklyn. If I thought that a visit to Park Slope would bristle with difficulties, I've had plenty of other lumber to get rid of, too.

How lucky I am that Ms NOLA is a tirelessly enthusiastic explorer (with Summer Hours!). Her legs weren't bothering her when we boarded the Q train for our return to Manhattan, but she had been carrying a few totes all the way, and our consciousness dimmed on the subway, to the extent that we found ourselves gliding out of the Atlantic Avenue station with absolutely no recollection of having stopped there. (June 2006)