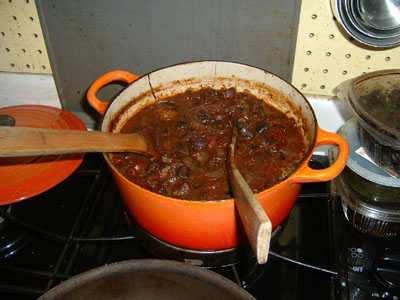 A restaurant near Lincoln Center, long since closed - Le Café Américain? - used to serve a delicious ragù, and I don't remember a thing about it, except that I liked it, and tried to copy it at home. What I wound up with was a recipe that I have never before written down.

The secret ingredient is what the butcher at Agata & Valentina calls "fennel sausage." This is basically a mild Italian sausage with bits of fennel mixed in. Not to mention a variety of other herbs and spices. The result is very subtle: all you can say is that it's more interesting, somehow, than plain sweet Italian sausage.

I know that I misuse the word "simple" to a criminal extent, but see what you think.

You will want about a pound of fennel sausage. My advice is to freeze this ahead of time. That makes peeling and slicing it much easier. You slash the skin of the frozen links and run them under warm water. The skin slips off easily, and pulls none of the meat with it. It's amazing how easy it is to slice or chop fatty meats when they're frozen!

While the sausage is browning in a knob of butter, over medium-low heat (you want to hear a gentle sizzle), chop two medium Vidalia or other yellow onions. The recipe is very forgiving to cooks like me who are cursed with poor knife skills. When the sausage has browned - be sure to have broken up the slices during the browning - toss in the onions and start quartering twenty ounces of white or cremini mushrooms. (That's two packages of fresh mushrooms. If you're measuring loose mushrooms, go for two pounds). The onions will be soft by the time you've finished this task, so toss the mushrooms in and stir until they're all cooked. (They'll be grey and moist - and somewhat shrunken.) Now, all you have to do is to add two fourteen-ounce cans of peeled, diced tomatoes and two fourteen-ounce cans of beef broth. Bring the ragù to the simmer and cook it for a few hours, adding more broth, or water, as needed to keep the sauce saucy. At a certain point - I've never been on hand to see it happen - the potful of admixed ingredients will meld into a compound.

No sooner than the next day, cook penne in a vat of boiling water. When it is done, drain it and bathe it in another knob of butter. Spoon the ragù into individual bowls, and distribute the penne on top of the sauce. Spoon more sauce - but not too much. Serve with a heaping bowl of grated parmesan cheese. Parmigiano-Reggiano of course! Accompanied by a green salad, my ragù makes a very satisfying meal.

5. Gently spoon the batter into an angel food mold. Bake the cake for about fifty minutes.

6. When the cake springs back, it is done. Remove the mold from the oven and invert it until the cake has cooled. (January 2007)