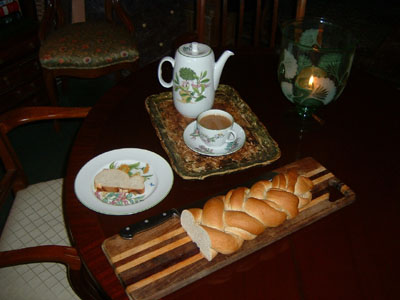 When I was little, I was fascinated by bread. How did all those little holes get into each slice? Why weren't they more evenly spaced? Come to think of it, where did bread come from? Flour, they said, but what could that mean? Flour is soft and fluid, but also dense and suffocating. It is very unlike bread. Yeast, they said. But yeast was a mysterious substance, never visible for inspection in our house. My grandmother had been a great baker, but my mother not only had no interest in cooking but watched her figure. No bread for her!

It was in my junior year at Notre Dame that I tackled the mystery of bread. I was living off campus, in an attic apartment that had its own kitchen but not its own bathroom. I would come home at night straight from Louie's, where I would have consumed a quart of beer and a side of fries, and open all the windows, because the flat was so stuffy. When the temperature dropped to arctic levels, I would fumble with The Joy of Cooking, whose excellent instructions I had glanced over unseeingly, and proceed to mix up some dough. Hours later, the lump of dough would be - the same lump of dough.

Assuming that the book must be mistaken (ah, youth), I would toss the lump of dough in a baking pan and expect the oven to work a miracle. It never did. What emerged after forty or fifteen minutes was a charred lump of dough. I even tried eating the first couple of misshapen productions, but my valor had limits.

I went through this Sisyphean ordeal several times, and then I gave up, moving on to some new folly. I moved back onto campus for my senior year, and did not take up baking until some time after graduation. Just when I finally sat down and studied the instructions - oh! those windows! I ought to have closed them! - I can't remember, but two years later, I was turning out reasonably good loaves. Kneading was a lot of work (I thought), you could never be sure about the yeast (hence the "proofing"), and baking was still, quite stupidly, something that I'd get around to at about three in the morning. But I kept my hand in.

During the country house period, which lasted about ten years, I almost always had a loaf of my own bread on hand. Usually it was a long pullman loaf, baked in a tin with a lid. When the bread was mostly baked, it was removed from the tin entirely and set directly on the oven rack, to develop a nice crust. I also made rye bread, from a recipe out of a book that I no longer have. The book's angle was a technique for speeding up the rising process by heating it gently in the microwave. The rye recipe got to be inconvenient, because it called for quantities of kosher pickle juice - more than I could keep up with, given my moderate consumption of pickles. Otherwise, I was never adventurous about bread. It was a staple, for sandwiches, not an artisanal craft thingy. I cannot stand whole-wheat bread. It is one of the few flavors that I really abhor.

The awful truth, however, is that I never liked my own bread more than certain store-bought brands. I've always been crazy about Levy's - with caraway seeds! And for sandwiches these days, I use Matthew's Golden White, from a bakery in Lowell, Massachusetts. Toasted, it is extraordinarily delicious. I have absolutely no earthly reason to make bread - except, of course, for the satisfaction of handling dough.

The only thing that properly-kneaded dough can be compared to is a baby's skin. It is supple and warm, Its smoothness falls between sticky and sleek. You are in no hurry to put it down. You can tell that the loaf is going to turn out well even before you shape it. There is an enormous rightness about good dough. I can think of nothing so satisfying that does not involve at least a measure of excitement. Breadmaking is totally tonic, and I recommend it to anyone who wants to be in touch with deep and primal forces.

Because it's not you, after all, who's responsible for the rising of bread. All you can do is stay out of the way of yeast, and see that nothing else interferes with it, either (close the window - no drafts!). And what does the yeast do? It - so to speak - consumes the gluten proteins in the flour, and then it excretes - farts - nitrogen. It is these bubbles of nitrogen that turn a lump of dough into a loaf of bread. The dough gives way to the bubbles, but the bubbles cannot go very far. This delicate process requires an atmosphere that is steady and mild. Once the loaf is in the oven, heat causes the bubbles to expand further, even as it dries out and cooks the dough. (And kills the yeast.) Voilà!

There is one kind of specialty bread that I can't buy in the stores. It is Scandinavian, flavored with cardamom, and associated, I'm told, with the Christmas holidays. My recipe is of Finnish extraction, and was given to me by the mother of a very old friend with whom I've lost touch. Maybe one of these days, my friend will Google the name of the bread, and we'll re-establish contact. Isn't that what the Internet is for?

Using a scale, weigh out 24 ounces of unbleached flour.

Combine 4 teaspoons of instant dry yeast, 1 half cup of water, and 1 teaspoon of sugar in a small bowl. Cover it with a towel. In fifteen minutes or so, the mixture should be bubbling. This is called "proofing" the yeast, and it is no longer necessary, unless your yeast has been exposed to the elements for six months, but there's no reason not to do it, either.

Scald 1 cup of milk with 3 tablespoons of cardamom. We must really look into this scalding of milk. I do not believe that any other foodstuff is called upon to be "scalded." Only children who overturn pots of hot coffee or touch overheated radiators are said to be scalded. When I was growing up, "scalding" milk meant bringing it almost but not quite to the boil. At the first few bubbles, you were to turn off the flame immediately. Fortunately, we now have microwave ovens. A minute on the "high" setting may be enough, but, no matter what, you must take the milk's temperature, because yeast dies at temperatures between 110º and 120º. That's half as hot as boiling. Baking bread is really nothing but yeast management.

In the bowl of a stand mixer, cream 1/4 cup butter and 1/3 cup sugar. Beat in 1 teaspoon of salt. Making sure that the milk mixture is no hotter than 115º, add it to the mixing bowl. Add a cup of the flour and beat the dough well. Beat in the yeast mixture. Then add the rest of the flour, one cup at a time. Beat in an egg at the end.

Let the dough rest for fifteen minutes, covered. You may do the kneading by hand, in which case consult this page. Or you may let the stand mixer do the work. Either way, the dough is properly kneaded when it no longer sticks to the board, to the bowl, or to your hands. It will have developed a distinctive satin sheen, and it will be very elastic.

Cover the dough and set it out of the way of any drafts. Allow it to double in bulk. "Double in bulk" is a rather meaningless phrase, as mathematicians are fond of pointing out. When a ball of something looks twice as big as another, it actually comprises four times the volume, or something like that. But cooks have been doing fine with "double in bulk" for at least a century. Resist the urge to measure with calipers. Remember, the French, who make much better bread than we do (they have hotter ovens), prescribe a mantra for all beginning bakers to reiterate with gusto: Allez, courage!

Remove the risen dough and punch it down (Allez, courage!). Knead it by hand for a few minutes. Divide the dough into six equal portions,* and roll each lump of dough into a long strand. Form two loaves by braiding three strands for each loaf. How to braid? Begin in the middle. Lay out one strand at 7:05. Cross it with a strand at !2:30 (but straight). Cross this with the last strand at 4:55. Get someone who knows what she's doing to help you.

Brush the loaves with a coffee glaze: dissolve 1 teaspoon of sugar in 1 tablespoon of strong coffee. Beat in the white of one egg.

When the bread is done, let it rest for half an hour or so. Then enjoy it, sliced, with good, strong coffee.

(Thanks to Helvi Thieman for the recipe!)

* Using a scale that does metric (the only way), I found that each lump of potential strand ought to weight just under 200 grams.