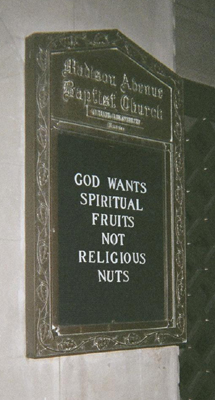 It is very difficult for me to write about something that hasn't taught me something. To learn something new is to reconfigure the brain, if only slightly, and for me there is something about the process that creates a compulsion to write. No such compulsion was born of reading Bill McKibben's piece, in Harper's, for August 2005, "The Faithful Paradox." Sure, there were a few little things that I learned from it, such as the dandy finding that

Only 40 percent of Americans can name more than four of the Ten Commandments, and a scant half can cite any of the four authors of the the Gospels. Twelve percent believe Joan of Arc was Noah's wife. [!!!!!]

That's how the essay begins. What immediately follows was not new.

This failure to recall the specifics of our Christian heritage doesn't matter all that much in spiritual or political terms. Here is a statistic that does matter: Three quarters of Americans believe the Bible teaches that "God helps those who help themselves." That is, three out of four Americans believe that this uber-American idea, a notion at the core of our current individualist politics and culture, which was in fact uttered by Ben Franklin, actually appears in Holy Scripture. The thing is, not only is Franklin's wisdom not biblical; it's counter-biblical. Few ideas could be further from the gospel message, with its radical summons to love of neighbor. On this essential matter, most Americans - most American Christians - are simply wrong, as if 75 percent of American scientists believed that Newton proved gravity causes apples to fly up.

What has happened in this country of ours, with its resistance to authority of any kind, is that most Americans have infected true Christianity with a metastasizing agent that produces a religion of accommodation. It is a Wicked Queen's mirror of a religion, assuring its followers that they're doing fine, and that Jesus loves them, no matter what

Well, not quite "no matter what." There is one thing that this American religion that is not Christianity demands of its followers: rigorous adherence to traditional gender and sexual ideas - ideas so vaguely touched upon in Scripture that debates raged for three or four centuries about correct Christian sexuality. Most impassioned believers seemed to feel that sex ought to be renounced altogether. Eventually, as I have postulated elsewhere on this site, Augustine of Hippo forged an authoritative compromise, and the matter was not discussed again until the Reformation, when Protestant clergymen decided, with momentous if totally unforeseen consequences for women's rights, that they ought to be allowed to marry. The issue has not been confronted in any Christian forum since. Aside from the issue of clerical celibacy, there are no real differences between the views of most American Protestants and most American Catholics. (Lay American Catholics appear at times to favor reducing this difference to nothing.)

Bill McKibben isn't interested in the fraudulence of the American Religion (as Harold Bloom so brilliantly, if unreadably, expounded it twelve years ago in American Religion: The Emergence of the Post-Christian Nation [Simon & Schuster, 1993]) for the same reasons that interest me. I am more concerned about the misuse of Christianity, while what concerns Mr McKibbin is its neglect. That's probably because he is, or tries to be, a genuine Christian, whereas I do not. But I certainly wouldn't mind seeing the country resume its Christian undertakings, all of which must necessarily radiate from the core Christian belief: Love thy neighbor as thyself. It is impossible to read the Gospels without acknowledging that this radical proposition is Christ's great commandment, replacing all other law. I doubt (on the basis of his remarks) that Jesus would have been much interested in doctrines of the Resurrection, the Trinity, the Eucharist, or any of the other dogmas that have kept minds hopping for two thousand years. He would probably have seen them all as distractions from the stringent duty of giving up everything that you have for the sake of making the lives of the sick and the poor better than they are. Period.

As Mr McKibben points out repeatedly, the political actions of the religious right in this country have all tended firmly in the opposite direction, and as an example he cites the failure of Alabama Governor Bob Riley to push through a tax hike. Alabama's tax code dated back to 1901 and was startlingly regressive. The increases would not have been onerous, but they were rejected by sixty-eight percent of Alabama's voters.

... meaning, of course, something like 68 percent of the Christians who voted. The opposition was led, in fact, not just by the state's wealthiest interests but also by the Christian Coalition of Alabama. "You'll find most Alabamians have a got a charitable heart," said John Giles, the group's president. "They just don't want it coming out of their pockets." On its website, the group argued that taxing the rich at a higher rate than the poor "results in punishing success" and that "when an individual works for their income, that income belongs to the individual."

One is struck dumb by Mr Giles's remarks. What sort of Christian doctrine was he brought up on?

The power of the Christian right rests largely in the fact that they boldly claim religious authority, and by their very boldness convince the rest of us that they must know what they're talking about. They're like the guy who gives you directions with such loud confidence that you drive on even though the road appears to be turning into a faint, rutted track. But their theology is appealing for another reason, too: it coincides with what we want to believe. How nice it would be if Jesus had declared that our income was ours to keep, instead of insisting that we had to share. How satisfying it would be if we were supposed to hate our enemies. Religious conservatives will all have a comparatively easy sell.

Not until the majority of Americans understand that the fight for "traditional values" that is being waged by the religious right is bogus, a fraud down to the ground, will the body politic recollect itself and resume its place among the developed nations of the earth. At the moment, from any genuinely Christian standpoint, the United States is merely another kleptocracy. (August 2005)