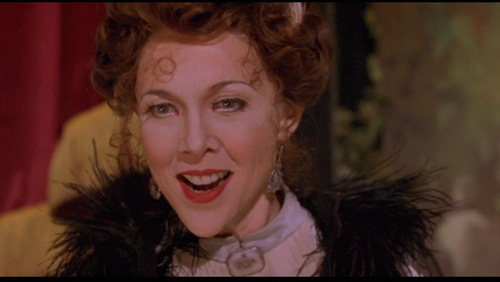 Few if any movies have besotted me quite so thoroughly as Being Julia. I didn't see the film when it was in the theatres, but came across it on HBO during a very idle moment. I watched it again and then bought it. And then the DVD spent a week in the kitchen TV. When the movie ended, I would often as not start it over again. I couldn't get enough of Annette Bening's scenery-chewing performance. Never has anyone seemed more alive on film than she does in the role of leading London actress Julia Lambert.

It was inevitable, therefore, that I would read the novel from which it's adapted, provided that I could get my hands on a copy. As it happens, Vintage International republished W Somerset Maugham's Theatre in 2001, along with another period-movie story, Up At The Villa (a movie that I also love, if not quite as madly). I'm always interested in what happens to the contents of a book when they're turned into film, and Theatre/Being Julia is one of the most toothsome cases that I've come across. The story of Being Julia is more or less the same as that of Theatre, but so many details are altered or repositioned that I began to wonder if scriptwriter Ronald Harwood was deranged by a fear of plagiarism. Why, for example, did he turn Tom, a Londoner, into an American? (Especially given that Shaun Evans hails from Liverpool.) On the whole, however, the changes all work to make the movie a better movie.

By which I don't mean that the movie is better than the book. It's more appealing, certainly, but it's also less psychological. Where the movie focuses on Julia, the novel is written from her point of view, essentially reversing the polarity. It is a lot less pleasant to know Julia's mind than it is to enjoy her huge zest for life from the outside. At the same time, Maugham's title is apt: I've never read a more penetrating novel about what it means to be a great actor. A great deal of it is half-conscious knack, but so is ironbound physical self-control. In both the novel and the movie, Julia's son, Roger, accuses her of always acting, onstage and off, and he's partly right. Julia isn't always acting, but she can start acting at the drop of a hat and without a cue.

Theatre is the story of a woman who surrenders to the advances of a much younger man only to find that she can't live without him. When she finds that he's not only unfaithful but unworthy, she suffers horribly at first but is lucky enough to be able to take a rest cure out of town. That the rest cure is effective suggests that the depths of her feeling must have been shallow, but in fact her attachment to the theatre is incomparably deeper. Here is Julia at the end, in a small dining room at a posh restaurant, dining alone.

She indicated a gesture towards the dance room. The lights had been lowered and from where she sat it looked more than ever like a scene in a play. "'All the world's a stage, and all the men and women merely players.' But there's the illusion, through that archway; it's we, the actors, who are the reality. That's the answer to Roger. They are our raw material. We are the meaning of their lives. We take their silly little emotions and turn them into art, out of them we create beauty, and their significance is that they form the audience we must have to fulfill ourselves. They are the instruments on which we play, and what is an instrument without somebody to play on it?"

Being Julia tells a different story, one of gleeful revenge. It would be savage if it weren't so vitally funny. The romance with the callow young man climaxes in a humiliating bedroom scene that has no counterpart in the novel; it's one of those scenes that test the courage of actors to look terrible. When the lovers patch up their quarrel, the movie signals Julia's duplicity by having her repeat to Tom words that she has already uttered to someone else, an admirer with whom she will never be physically intimate.

I don't want to lose you. I - I have few friends, real friends; you're the only person in my life with whom I can be entirely myself. I'm terribly low at the moment. I need you. Let's go on seeing each other, please?

The patch-up comes about halfway through the movie. What follows is Julia's elaborate revenge.

In the novel, Avice Crichton, one of Tom's side dishes, is a pretty girl unendowed with Thespian gifts whom Julia insists upon casting in her new play because it's the surest way of making her look bad in front of Tom. On the first night, she upstages Avice a bit in one scene, but later on resolves not to do it again. That is really all there is to Avice Crichton in the book. In the movie, there's quite a bit more, and it's all delicious. Here, Avice can act, and Julia wants to have her in the play so that she can humiliate the girl onstage, to a degree not imagined in the novel. Indeed, I suspect that Maugham would find the screenplay rather broad. Indeed the physical comedy and dramatic bombast with which Being Julia approaches its finale are totally over the top. Between the sneezing, the tripping, the swinging and the ranting, there's not much room for nuance. That's exactly why the movie is so satisfying. Julia improvises a very different ending for the play, pulls it off and tastes the triumph of her career. Avice is left strewn upon a potted prop, draped by the dazzling shawl that nobody knew Julia was planning to wear, not even her dresser. In this amazing scene, Julia is both the lion and the tamer.

The filmmakers hit upon an ingenious device for marking Julia apart from other, lesser mortals: she receives criticism and encouragement from the ghost of Jimmie Langton, her late drama teacher: what he didn't know about theatre wasn't worth knowing. He appears from time to time whenever Julia might be acting. Usually she is, and in the one scene where she's not - it follows the bedroom scene mentioned earlier - Jimmie reminds her that acting is all about imitating feelings, not feeling them. This is in the great English tradition of detached impersonation, so contrary to the American school of Method acting. When, after a second and, this time, final rupture with Tom, Julia pours herself into the grief that afflicts her character, and her manager husband comes to her dressing room afterward to ask why she has given a horrible performance. (It is at this juncture that a rest cure is decided upon.) Jimmie anchors the movie's hold on what the novel's Julia says about illusion and reality.

Theatre abounds in scenes that the movie truncates or cuts altogether. Julia's rest cure in the film sends her to Jersey, where she grew up and where her mother and an aunt still live. These women, sensibly dressed in tweeds, become rather ancient dames in black who live at St-Malô.

They made a fuss of her, not because she was a great actress, but because she was in poor health and needed rest. Julia to her great amazement soon discovered that to them her celebrity was an embarrassment rather than an asset. Far from wanting to show her off, they did not offer to take her with them to pay calls.

She said good-bye to her mother and to Aunt Carrie. They had been very kind to her, but she had an inkling that they would not be sorry when her departure allowed them to return to the life she had interrupted. They were a little relieved besides to know that now there was no more danger of some eccentricity, such as you might always run the risk of with an actress, which might arouse the unfavourable comment of the ladies of St Malo.

Maugham's prose style hovers a bit uncomfortably at the margin of the naturalistic. It is never quite dated, but nobody would take it for contemporary writing. Maugham writes with a casual, sometimes unpremeditated pen. When he writes in Julia's interior voice, the language sparkles gaily. In a scene in which Julia tries to seduce her longtime admirer, whom she refused decades earlier, the actress runs into some unforeseen resistance.

It was quite obvious that he just hadn't understood. It could hardly be wondered at. She had been deaf to his passionate entreaties feor twenty years, and it was very natural if he had given up the quest as hopeless. It was like Mount Everest; if those hardy mountaineers who had tried for so long in vain to reach the summit finally found an easy flight of steps that led to it, they simply would not believe their eyes: they would think there was a catch in it. Julia felt that she must make herself a little plainer; she must, as it were, reach out a helping hand to the weary pilgrim.

(In 1937, when Theatre appeared, the conquest of Everest lay sixteen years in the future.) In Being Julia, this scene is given a wonderful twist. The admirer comes to see Julia at her mother's place on Jersey; when she tries to seduce him, he stammers and blurts out that he "plays for the other side." This reminds me that Maugham is very clever about sex. He has the knack of conjuring the illusion of racy scenes by prompting the adult reader to take an ostenisbly innocent detail or two and run with it as far as said reader cares to go. By the same token, this trick congratulates sophisticated minds for exactly as much sophistication as they possess. That may be the secret of Maugham's success not so much as a novelist but as a writer. He winks, he nudges, and you "know" what he's talking about. To read Theatre is almost to revisit the world of prewar privilege in which Maugham so effortfully traveled. "I'm reading the new Maugham, darling." But beneath the comforts of Maugham's very readable prose lie the pricks of doubt: is Julia, so charming, so accomplished, so generous and seductive - is she a monster? (May 2006)