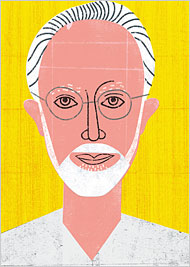 In which we have a look at this week's New York Times Book Review.

Three of this week's reviews — by Lee Siegel, Manohla Dargis, and Dominique Browning — are of the unhelpful, "corrective" type, in which the reviewer tells us what the author ought to have written. Although there is certainly a place for this sort of discussion, it is more properly aimed at people who have read a book than at those who might be thinking about reading it. The fact that such essays in disguise are usually very interesting does not excuse their publication in the Book Review.

Mark Greif's Essay, "The Hard Sell," is a persuasive bit of boosting for Vance Packard's 1957 classic, The Hidden Persuaders, occasioned by the fiftieth-anniversary edition with an introduction by the always shrewd Mark Crispin Miller.

The following titles belong on your bookshelf.

An Ordinary Spy, by Joseph Weisberg. Mark Costello's extremely favorable review presents this book as a must-read for any literate American, partly because it's a great novel about the CIA (which has "the office culture of a savings bank in Cleveland) but mostly because Mr Weisberg's protagonist belongs to a long line of fictional spies who serve as "a stand-in for the nation."

Like these others, Ruttenberg is more than ordinary. He is an emblem of the country now. A gifted multitasker, he can kiss while nimbly gaming out the different ways to parse the rules, to skirt the truth, to beat the polygraph. With his deft evasions and his yuppie-class ambitions, he is a creature of the modern mood-lit office, the cubicle universe. He is, in short, a Smiley for the Enron generation.

The review also serves up a relatively lengthy passage from An Ordinary Spy, so that readers can catch the flavor of Mr Weisberg's writing — a service that ought not to be exceptional.

Modernism: The Lure of Heresy From Baudelaire to Beckett and Beyond, by Peter Gay. The one good thing that Lee Siegel has to say about this latest book from the nation's premier cultural historian is that the "gift of this book and The Rest Is Noise, Alex Ross's magisterial history of modern music, would equal about three years of college." The rest of the review is a pile-up of carping complaints about how Mr Gay has got this or that detail wrong. Such extensive erroneousness must surely have an explanation, but Mr Siegel does not seek one. He is too busy advancing his own views on Modernism. His review is accordingly unhelpful.

These titles appear to deserve coverage in the Book Review. The reviews may still be inadequate or useless.

Diary of a Bad Year, by J M Coetzee. Kathryn Harrison's review contributes, intentionally or not, to the general impression of Nobelist Coetzee as a decidedly misanthropic moralist who writes almost toneless prose.

In this most recent “novel,” we are deliberately manipulated by a form that is coy as well as playful, and it’s hard not to conclude Coetzee is more invested in his relationship with his readers than in his characters’ credibility and interactions with one another. “What interests the reader,” Señor C writes, “is the quality” of the author’s “opinions themselves — their variety, their power to startle, the ways in which they match or do not match the reputations of their authors.” Perhaps. After all, how riveting can fictional entanglements be when compared with the more immediate and real relationship between a writer and his audience, especially when that writer seems to betray anxieties that he might be, despite his Nobel Prize and his two Bookers, irrelevant, “some odd extinct creature ... on the point of turning into stone,” “a pedant who dabbles in fiction"?

Readers will be grateful for the accompanying image of two facing pages of the novel, which is composed in three parallel voices.

The Man Who Created Sherlock Holmes: The Life and Times of Sir Arthur Conan Doyle, by Andrew Lycett; and Arthur Conan Doyle: A Life in Letters, edited by Jon Lellenberg, Daniel Stashower and Charles Foley. Jeremy McCarter's slyly droll review praises Mr Lycett for his elegant patience but raises an eyebrow at the editors of the letters (most of which, it seems, are addressed to the author's mother).

The sheer imposing weight of the book and the editors’ indulgence of their subject make you think that here, at last, is Conan Doyle as Conan Doyle would want to be seen: a man of many parts whose diverse and lofty interests (including two campaigns for Parliament) merely happened to extend, now and then, to the odd detective yarn. The approach backfires. After endless pages of financial updates, cricket scores and assorted effusions to Mam, you begin to feel that a wiser man would have spent less time complaining about the shadow cast by Sherlock Holmes and more time feverishly thanking the literary gods for its existence. For in its absence, who would notice, let alone publish, humdrum notes like these? Conan Doyle might have been annoyed to hear it, but “The Hound of the Baskervilles” or “A Scandal in Bohemia” and all those other deathless stories are the finest tribute their author is likely to get, or deserve.

The Long Embrace: Raymond Chandler and the Woman He Loved, by Judith Freeman. Tom Shone's somewhat acerbic review is the funniest thing in this week's Book Review — which is why I've extended the book the benefit of the doubt. Here is Mr Shone on Ms Freeman's obsession with the Chandler's slightly irregular marriage:

What this means in practice is: she rolls up at some of the 30-plus apartments the Chandlers inhabited in Los Angeles, takes up position next to the Dumpster, inhales the gardenia-scented air and tries to intuit — by sheer force of authorial empathy alone — the answers to her questions. Did Cissy enjoy sex with her young husband? Did he ever find out the full truth about her age? Why did she do her housework naked? Could she have developed an addiction to painkilling drugs over the years? Did Ray’s leg fetish indicate Oedipal hang-ups? Was he gay?

The answers not being forthcoming, all she collects for the most part are puzzled looks from the neighbors and a couple of slammed doors. Sometimes she goes into the house, sometimes she doesn’t.

The Star Machine, by Jeanine Basinger. Jeanine Basinger runs film studies at Wesleyan. Manohla Dargis reviews movies for the Times. It would appear, on the basis of Ms Dargis's review of Ms Basinger's book, that the two writers see Hollywood history in very different ways. As a result, the book gets lost in the smoke generated by Ms Dargis's disagreements with Ms Basigner's way of thinking. The review may be fun to read (not because it's especially witty but because gossip about film stars of yore is always catchy), but it does not serve the Book Review or its readers very well.

It is difficult to tell whether these books are actually as indifferent or pointless as the reviews suggest.

The Painter of Battles, by Arturo Pérez-Reverte (translated by Margaret Sayers Peden). Lorraine Adams is so unsympathetic to this novel, calling it "curiously inert and static," that one wonders why she has been invited to write about it. The photograph of the handsome, smiling author seems an awkward apology for the graceless review, which illiterately fails to consider the novel as Spanish literature.

The Geography of Bliss: One Grump's Search for the Happiest Places in the World, by Eric Weiner. Pamela Paul's somewhat unsympathetic review doesn't try to rescue this book from its unfortunate frivolous subtitle.

The problem with “The Geography of Bliss” is one of tone. It comes across as an attempted amalgam of Paul Theroux’s bleak humor, P. J. O’Rourke’s caustic wit and David Sedaris’s appreciation of the absurd. There’s a kind of forced jocularity to Weiner’s writing, as if the author were trying to affect the appropriate persona for his subject. Rather than projecting a hoity NPR-ness (Weiner was one of its foreign correspondents for a decade), he cops an attitude of faux populism, taking potshots at the Ivy League, Nietzsche and other dead white males, all of which comes across as somewhat insincere.

The Warmest Room in the House: How the Kitchen Became the Heart of the Twentieth-Century American House, by Steven Gdula. Dominique Browning, a former House & Garden editor, is well-qualified to write intelligently and engagingly about the evolution of the modern kitchen — and she does so here. What she does not do, really, is review Mr Gdula's book, except to fault it for being "wrongheaded."

These books, if they deserve coverage at all, ought to grace other sections of The New York Times.

Liberal Fascism: The Secret History of the American Left From Mussolini to the Politics of Meaning, by Jonah Goldberg. Having noted that Mr Goldberg is "a conservative columnist and contributing editor for National Review," David Oshinsky describes his book as "less an exposé of left-wing hypocrisy than a chance to exact political revenge." Although the review does not appear to be markedly hostile, it describes a screed that has no place in the Book Review, "witty intelligence" or not.

Ronnie: The Autobiography, by Ronnie Wood. Mr Wood is the newest member of the Rolling Stones, having joined the band somewhat after its salad days. Ira Robbins writes, apparently with favorable intent,

In the generous and sincere tone of a speechmaker at a retirement party, Wood recounts the earning and spending of several fortunes, copious cocaine and alcohol intake, women he’s loved, the great musicians and celebrities he’s known and farcical scrapes with the law, drug dealers and other nefarious businessmen — none of which he takes too seriously.

Permalink  | Portico |  About this feature