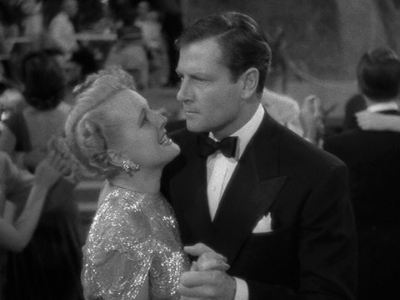 Princess: Oh I love you like this, with lightning flashing out of your eyes.

For quite some time, my two favorite funny movies have been The Awful Truth (1937) and The Palm Beach Story (1942). I have never been able to put one ahead of the other in a list, and the movie in third place - well, I don't know what the movie in third place is. How about a tie between Bringing Up Baby (1938) and its remake, What's Up, Doc? (1972)? My two favorites have a few things in common - they've both about rich people, for one thing - but they're really very different. The Awful Truth takes place entirely in well-appointed rooms, an imposing court, and a fantastical night club. The Palm Beach Story takes place very largely outdoors and on the move - on a train, on a plane, on a yacht, and even in the driveway. The soundtrack, which is full of tongue-in-cheek quotations from the classics, gives the movie a musical feeling, and Rudy Vallee actually sings. (And one of the things that he sings, briefly, is that Paramount inevitability, "Isn't It Romantic?") The Awful Truth limits itself to two musical items, "Home on the Range" and "Gone With The Wind," a novelty number not directly inspired by Miss Mitchell's opus. And where The Awful Truth portrays rich people as they're conventionally imagined by Hollywood, The Palm Beach Story is insider information, written from the standpoint of someone very familiar with the high life - as writer, director, and producer Preston Sturges was - and altogether unconcerned with whether the mass audience "gets it."

Finally, what sets The Palm Beach Story apart from nearly every other picture ever made is that it is an adventure story in which a woman has the adventure. That being the case, the movie offers not space ships and secret passwords but no end of sexual innuendo. It can hardly go for two minutes without a sight gag, a double-entendre, or a compromising position. All the while, of course, remaining perfectly decorous. This is the sort of naughty artwork that gets round the censors by rising above them, by being quietly intelligent and avoiding horseplay. If you think that this is the picture of a woman struggling with the zipper of her dress, period, then you will not find The Palm Beach Story half as funny as I do, because, given my perverted mind, what I see is Claudette Colbert doing the hootchie-kootchie with her clothes on.

As befits an adventure, the plot is quite straightforward. Geraldine and Tom Jeffers (Claudette Colbert and Joel McCrae) are having a hard time making ends meet. Tom's career as an architect hasn't achieved success, and the Jeffers' are on the verge of eviction. They're saved by a surprising windfall, but they quarrel about it because accepting it wounds Tom's pride. Gerry concludes that the marriage can't work, because Tom gets so madly jealous whenever one of his potential clients makes a pass at her - and they all do. She resolves to get a divorce and marry someone more substantial, after which she'll be able to steer business Tom's way. Tom, who evidently hasn't seen It Happened One Night, questions Gerry's ability to attract millionaires, and naturally he's too proud to let Gerry be so noble. So Gerry is forced to run away. With nothing but her handbag, she hitches to Pennsylvania Station and cajoles a free train ride to Florida out of some sporty gents. (The is the celebrated "Ale & Quail Club" scene, and it really captures the zaniness of the cloistered rich.) When gents get a little too sporty, Gerry escapes again, this time into the the berth over John D Hackensacker III (Rudy Vallee), a Croesus who believes that staterooms are un-American, and hereinafter known as "Snoodles." This knight in shining armor decides that he and Gerry will get off the train at Jacksonville, buy her a few clothes (she's down to towels and pajamas), and finish the journey to Palm Beach on his yacht. Meanwhile, as the result of a second windfall, Tom manages to fly to Palm Beach. He's at the dock when the yacht pulls in, as is Snoodles's sister, the Princess Centimillia (Mary Astor). Gerry quickly introduces Tom as her brother, and the Princess falls for him on the spot. She insists on everybody's staying at her little place. That night Snoodles promises Gerry that he will help her "brother" to the tune of a hundred thousand dollars, which is what Tom needs to get his airport built. Gerry is elated, but Tom disgusted, and the two retire to opposite ends of their suite in sour moods. From beneath their windows, Snoodles serenades Gerry, but the music has an unintended effect. Gerry can't seem to get out of her dress, and when Tom helps her with the zipper, she acknowledges that she's hopelessly in love with him. The next morning, the real brother and sister are disappointed, but only briefly, because Tom and Gerry are both twins. The entire action has wound up in less than four days.

What keeps this thin and objectively undramatic story going - there is really no climax, most of the big fun is in the middle, and Mary Astor's character drops in very near the end - is the badinage. The movie cracks jokes over, under, around, and through sex, but never about it. To attempt a catalogue would be to reassemble the movie; a collection of greatest lines would eventually comprise the script, and those scenes that wouldn't make a list of the great ones are absolutely essential to our stability. The Palm Beach Story is like a film by Hitchcock: you notice a new detail every time you watch it.